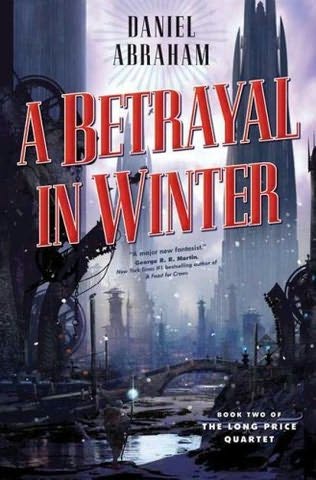 A Betrayal in Winter

Synopsis of A Betrayal in Winter

Daniel Abraham delighted fantasy readers with his brilliant, original, and engaging first novel, A Shadow in Summer. Now he has produced an even more powerful sequel, a tragedy as darkly personal and violent as Shakespeare's Macbeth. As a boy, Otah Machi was exiled from his family, Machi's ruling house. Decades later, he has witnessed and been part of world-changing events. Yet he has never returned to Machi. Now his father--the Khai, or ruler, of Machi--is dying and his eldest brother Biitrah has been assassinated, Otah realizes that he must return to Machi, for reasons not even he understands. Tradition dictates that the sons of a dying Khai fall upon each other until only one remains to succeed his father. But something even worse is occurring in Machi. The Galts, an expansive empire, has allied with someone in Machi to bring down the ruling house. Otah is accused, the long-missing brother with an all-too-obvious motive for murder. With the subtlety and wonderful storytelling skill of his first novel, Abraham has created a masterful drama filled with a unique magic, a suspenseful thriller of sexual betrayal, and Machiavellian politics.

Reviews of A Betrayal in Winter

Compellingly plotted and elegantly written, A Betrayal in Winter is a very successful continuation of what promises to be a significant and original contribution to fantasy literature. -- F. Brett Cox, Scifi.com