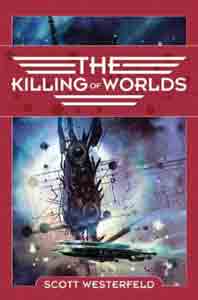 The Killing of Worlds : Book Two of Succession

Synopsis of The Killing of Worlds : Book Two of Succession

Captain Laurent Zai of the Imperial frigate Lynx is a walking dead man. Unjustly held responsible for the death of the Child Empress, sister of the immortal Emperor, Zai has been sent to fight an unwinnable battle. The Lynx must stop a vastly superior Rix ship from reaching the planet Legis, a suicide mission that will almost certainly end in oblivion for Captain Zai and his crew.

On the planet Legis below, a Rix compound mind--a massive emergent AI formed from every computer on the planet--as been isolated by their Imperial blockade. But the mind has guided a lone Rix commando, Herd, to the planet's frozen north, and will soon order a desperate attempt to seize a polar communications array and break the blockade. Herd is a single warrior against an Imperial army, but moving silently behind her is the intelligence of an entire planet.

Ten light-years away, Captain Zai's true love, the psychic (some say mad) Senator Nara Oxham is engaged in a deadly game of political intrigue. From her position on the Emperor's War Council, Senator Oxham must find a way to forestall the Emperor's final solution if the blockade is broken: a nuclear strike to destroy the compound mind, which will also kill millions of Imperial citizens. She suspects that the Emperor has a hidden weakness discovered, by the mind, a secret so dangerous to his immortal dynasty that to prevent its discovery the Emperor is willing to countenance the ultimate crime. . . .

The killing of worlds.

Reviews of The Killing of Worlds : Book Two of Succession

Scott Westerfeld's major achievement in this Series to date (the current Book ends with the Lynx preparing to return to Home at sublight speeds and the Empire just starting to seethe) has been to create a poetry of forces and physics, a romance of infrastructure and technology, a ballad of science and engineering. -- Paul Di Filippo, Scifi.com

Despite my occasional misgivings about some of the characters, I still thoroughly enjoyed this Book, largely because of the fantastic battle sequences. -- Tomas L. Martin, SF Crowsnest