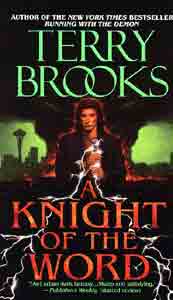 A Knight of the Word

Synopsis of A Knight of the Word

An unbroken string of fourteen national bestsellers has established Terry Brooks as today's leading voice in fantasy fiction, a writer whose magical creations and characters are beloved the world over. Now, in this no-holds-barred battle between good and evil, the dazzling sequel to his bestselling Running with the Demon, Brooks surpasses even himself.

In the eleventh century the Welsh hero Owain Glyndwr was chosen to combat the demonic evil of the Void and disappeared from history to fulfill that mission. Armed with powerful magic, Glyndwr became a Knight of the Word - a draining and demanding legacy passed on eight centuries later to John Ross, a professor of English literature on tour in Wales.

In accepting the black runestaff that channeled the magic of the Word, John Ross accepted a solemn trust - and an awful burden. Each night he dreams of hellish futures wrought upon the world by the Void. And each dream is of a future that will come to pass unless Ross prevents it in the present. Crippled in body and soul by the searing magic he wields and the horrors he dreams, sustained only by his faith in the goodness of the Word, Ross drifts across America, a modern-day knight errant in search of the agents of the Void.

Then an unspeakable act of violence shatters his weary beliefs. Haunted by guilt, John Ross turns his back on the Word. With the help of beautiful Stefanie Winslow, Ross slowly builds a new life - a life whose only magic lies in Stefanie's healing love.

But a fallen Knight makes a tempting prize for the Void, and merciless demons soon stalk Ross and those close to him. His only hope is young Nest Freemark, who wields a powerful magic all her own. Five years earlier, Ross had aided Nest when the future of humanity rested upon the choice she would make between Word and Void. Now Nest must return the favor. She must restore Ross's faith, or his life - and her own - will be forfeit... -- terrybrooks.net

Reviews of A Knight of the Word

A Knight of the Word is a sure bet and, in all probability, will be his 15th straight bestseller. -- Wayne MacLaurin, SF Site

This was the Terry Brooks that I knew and loved. -- Conan Tigard, BookBrowser

Marred only by an occasional tendency to rely on shorthand narrative descriptions rather than active scenes, A Knight of the Word is a solid, exciting transition to a third novel in this magical Series. -- William D. Gagliani, BookPage

A Knight of The Word is a very satisfying sequel to Running With the Demon, a novel which I personally thought was Brooks' best Book. Now I may have to revise my thinking! -- Elizabeth Baldwin, Mysterious Galaxy