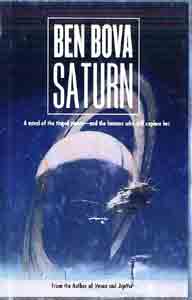 Editorial Reviews From Publishers WeeklyToo many characters with too many agendas vie for prestige and power en route to Saturn aboard the Space Habitat Goddard in Hugo winner Bova's middling follow-up to Jupiter (2001) and Venus (2002). Ten thousand intellectuals and scientists, mostly people who don't agree with the Authoritarian regimes controlled by the religious fundamentalists who've taken over Earth's governments, have volunteered, been asked or been forced to leave on the long one-way journey. Among them are Malcolm Eberly, recruited by the Holy Disciples from a prison in Vienna with strict instructions to ensure the population chooses the path of righteousness. Eberly agrees to his covert task, confident he can impose his own rule, but he finds that gaining control is harder than he thought. Holy Disciple spies continually get in his way, while one of his subordinates murders for a promotion. Blackmail, subterfuge and another planned murder pile on top of Eberly's machinations to rig an election. Though Bova thoroughly explores human motivation and desires, readers will have a hard time figuring out who to root for-is Eberly a good guy or a bad guy?-and an even harder time caring about characters insufficiently fleshed out. Most memorable is the setting, the Goddard, with its echoes of the sailing ships that transported convicts to Botany Bay.Copyright 2003 Reed Business Information, Inc.

Book DescriptionSecond in size only to Jupiter, bigger than a thousand Earths but light enough to float in water, home of crushing gravity and delicate, seemingly impossible rings, it dazzles and attracts us:

Earth groans under the thumb of fundamentalist political regimes. Crisis after crisis has given Authoritarians the upper hand. Freedom and opportunity exist in space, for those with the nerve and skill to run the risks.

Now the governments of Earth are encouraging many of their most incorrigible dissidents to join a great ark on a one-way expedition, twice Jupiter's distance from the Sun, to Saturn, the ringed planet that baffled Galileo and has fascinated astronomers ever since.

But humans will be human, on Earth or in the heavens-so amidst the idealism permeating Space Habitat Goddard are many individuals with long-term schemes, each awaiting the tight moment. And hidden from them is the greatest secret of all, the real purpose of this expedition, known to only a few....

As usual, Bova's work pushes the genre forward, making astute observations that affect both the genre as a whole, and the future of humanity. -- Cindy Lynn Speer, Fantastica Daily

Fans of the Series will be pleased to see a combination of new characters and old favorites. -- BooksForABuck