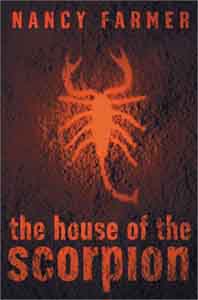 The House of the Scorpion

Synopsis of The House of the Scorpion

At his coming-of-age party, Matteo Alacr...n asks El Patr...n's bodyguard, "How old am I?...I know I don't have a birthday like humans, but I was born."

"You were harvested," Tam Lin reminds him. "You were grown in that poor cow for nine months and then you were cut out of her."

To most people around him, Matt is not a boy, but a beast. A room full of chicken litter with roaches for friends and old chicken bones for toys is considered good enough for him. But for El Patr...n, lord of a country called Opium -- a strip of poppy fields lying between the U.S. and what was once called Mexico -- Matt is a guarantee of eternal life. El Patr...n loves Matt as he loves himself for Matt is himself. They share identical DNA.

Reviews of The House of the Scorpion

For those who love adventure, there are breathless escapes and dangers, rock climbs and a chilling journey across a bone pile, helicopter landings, jails for orphans, mysteries and surprises unveiled. -- Liz Rosenberg, The Boston Globe

Despite its somewhat rushed end, "Scorpion" puts a heartbeat into the consequences of genetic engineering. -- Judy Green , The Sacramento Bee

It is an excellent read and one that should provide great discussions both inside and outside the classroom. -- Olgy Gary, Children Come First

While the question of Matt's humanity drives the novel, it gets answered and then dropped too easily; still, it's an enormous credit to Farmer that the story, character development and theme grow all of a piece. -- Roger Sutton, The New York Times

With all the makings of a modern classic, The House of the Scorpion is both shocking and intense, particularly because it looks toward an all-too-possible future. -- Matt Warner, Bookworld