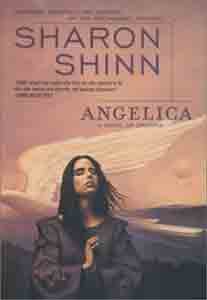 Two hundred years ago, in order to keep the peace in Samaria, the god Jovah created a legion of land-dwelling angels, led by an appointed Archangel. Now, Jovah has a new appointee: Archangel Gaaron. And for his life-mate, his Angelica, Jovah has chosen a woman named Susannah. With trepidation, she bows to the will of Jovah and an unspoken affection slowly develops between the two.

But there is a terrible threat besetting the land-black-clad strangers who call fire down from the sky, leaving death and destruction in their wake. And the true hearts of Archangel and Angelica may never be known, as the future of the planet hangs in the balance...

Fans of Anne McCaffrey's Pern Series are going to love ANGELICA, the fourth novel that deals with the unique culture of Samaria. -- Harriet Klausner, BooksNBytes

Overall, Angelica is a welcome addition to an excellent Series, not to be missed by fans of speculative fiction with heart. -- Hilary Williamson, BookLoons

Whether you're new to the Series or a long-time fan like me, you'll slip easily into this new novel. -- Lola Sparks, Italics SF Review