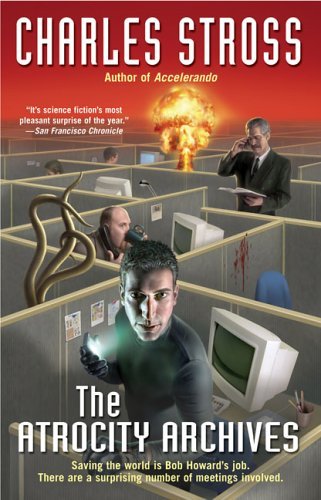 Synopsis of The Atrocity Archives

In the title piece, Alan Turing, the father of modern computer science, completes his theorem on 'Phase Conjugate Grammars for Extra-dimensional Summoning'. Turing's work paves the way for esoteric mathematical computations that, when carried out, have side effects that leak through a channel underlying the structure of the Cosmos. Out there in the multiverse are 'listeners' who can sometimes be coerced into opening gates. In 1945, Nazi Germany's Ahnenerbe-SS, in an attempt to escape the Allied onslaught, performs just such a summoning on the souls of more than six million. A gate opens to an alternate universe through which the SS move people and material -- to live to fight another day. But their summoning brings forth more than the SS have bargained for -- an evil, patiently waiting all this time while learning the ways of humans, now poises to lunch on Earth. Secret intelligence agencies, esoteric theorems, Lovecraftian horrors, Middle East terrorist connections, a damsel in distress, and a final battle on the surface of a dying planet round out this story.

Reviews of The Atrocity Archives

I'm not really a fan of espionage fiction, or horror, but Stross does a fine job of making those genres fresh with his attention to personality and believable human interaction. -- George Shaner, SFRevu.com

The story is a good, solid piece of SF based on Lovecraftian horror. It's quite an accomplishment. -- Mark L. Olson, New England Science Fiction Association, Inc.