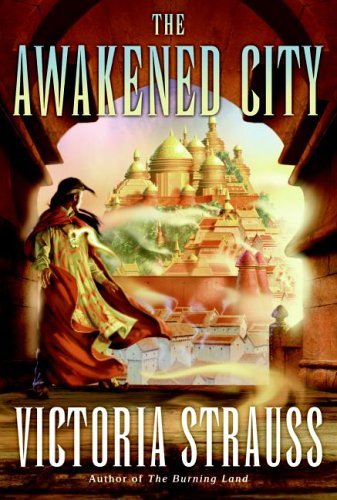 Synopsis of The Awakened City

After centuries of oppression, the Empire of Arsace has finally reclaimed the capital city of Ninyaser and the First Temple of the Gods. But the powerful Brethren will tolerate no challenge to their rule, and an expedition to destroy the secret colony of Refuge, home to ancient mysteries and forbidden sorcery, has proved the catalyst for war.

Ravar, the most powerful of the hidden Shapers, vows revenge against the Brethren. Raising an army of worshippers and kidnapping the seer Axane to help him in his quest, he travels to the holy city of Baushpar itself as the Empire prepares for battle. Meanwhile, leaving his peaceful life behind to save Axane, the Shaper Gyalo has a startling epiphany.

Against a backdrop of war, insurrection, and sacrifice, two powerful Shapers must discover who is the true Next Messenger, for their quest will lead either to salvation or destruction.

Reviews of The Awakened City

This novel, and its predecessor, are both superb fantasies that deserve a wide readership. -- Pamela Sargent, Scifi.com

This is a thrilling story that works supremely well as fiction while prompting thoughtful reflection on the fundamentalism and secularism complicating our world today. -- Juliet E. McKenna, The Emerald City

Though better to have read the previous novel THE BURNING LAND this invigorating tale can stand alone in its fervent plea for forbearance of one another's beliefs. -- Harriet Klausner's Review Archive