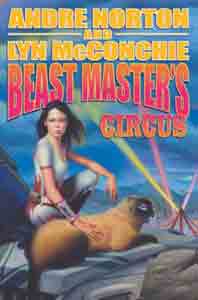 Since the dreaded Xik destroyed Earth, the corps of Beast Masters and the animal teams with which they have telepathic rapport have served as sentinels against the Xik and other threats to colony worlds throughout the galaxy.Now a conspiracy with ties to the Thieves Guild is trying to kidnap the Beast Masters' team animals. On one world after another, they are attacking Beast Masters and targeting their animals, leaving a trail of dead or wounded Beast Masters and their animals in their wake. They haven't yet succeeded in capturing one alive . . . but they are still trying, and they're becoming more desperate---and bolder.Laris is a young woman who works for a spacefaring circus, a bonded slave to its manager. An orphan with a troubled past, Laris is gifted with animals, a valuable asset to the circus and to her boss. But she's learned that somehow there's a connection between him and the Thieves Guild, and also the attempted abductions of Beast Masters' animals. She also knows that if her boss finds out what she has discovered, it would make her a problem, and he usually disposes of problems.When the circus lands on Arzor, home to Beast Masters Hosteen and Tani Storm, Laris feels a kinship to them and to Hosteen's family, the Quades. She realizes, however, that she may be endangering them by exposing them to the dark interest of her boss and his ill-intentioned friends. Hosteen and Tani like Laris, too, as does Logan Quade. She would give anything to tell them her dangerous secret, but cannot. Because she knows that her friendship with the Beast Masters could be their downfall, as well as her own!

A well paced adventure, Norton and McConchie have teamed up to bring us a very sweet and exciting story. -- Cindy Lynn Speer, Fantastica Daily