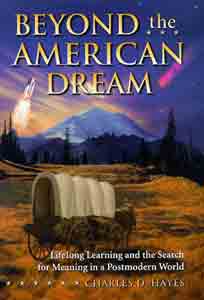 Beyond the American Dream: Lifelong Learning and the Search for Meaning in a Postmodern World

Synopsis of Beyond the American Dream: Lifelong Learning and the Search for Meaning in a Postmodern World

The final decade of the Second Millennium has issued a flourish of Books foretelling the end of everything from science to history. In the first decade of the Third Millennium, Books about new beginnings will take their place. Is it a time for despair or hope? Many of today's social critics deplore the effects of multiculturalism in spawning a postmodernism era. One observer, however, finds reason to celebrate, claiming it's about time we looked beyond the confines of our king-of-the-mountain value system, to a broader plane of understanding.

In his newest Book, Charles D. Hayes submits that the American Dream we've learned to champion is an insufficient aspiration for human beings. Cultural expectations create social reality. "If having must come at the expense of being," he asserts, "then you and I are missing the best part of life and our culture is the worse for it."

Reaching the top--at any cost, by the current model--has outlived its usefulness as a go! al in human society. Those who make it, remain unfulfilled. Those who don't, become marginalized and resentful. Through the power of our intellect, says Hayes, we can begin living off the interest of our biological world instead of continuing to eat away at the principle. Either we improve society through our ideas, or we perpetuate its deterioration through a lack of them.

A sophomoric sense of citizenship might reason this way: "Since I wasn't alive during slavery, I bear no responsibility for it." Certainly, it is senseless to blame ourselves for what happened before we were born, but Hayes maintains we do have a responsibility toward what is. If you and I are the beneficiaries of an unjust system stemming from the biases, prejudices, and atrocities of the past, then we have an obligation to remedy the unfairness. Beyond the American Dream points the way to rising above the lock-step patterns of our culture and assuming our rightful roles as thoughtful, responsible citizens.

In failing to truly value to individual thought and reflection, our society guarantees that an ever-increasing number of citizens will practice neither. As in his previous works, Hayes urges readers to take control of their own learning and to adopt self-directed inquiry as a lifelong priority. Education should be regarded "not as something you get," he says, "but as something you take. Self-education is the lifeblood of democracy, the key to controlling your life, and a means to living your life to its fullest."

Beyond the American Dream illustrates these ideas in practice. Offering fresh insight on the wisdom of great thinkers from Aristotle to Alan Watts, together with a tantalizing juxtaposition of ideas that can't help but foster reflection, Hayes demonstrates how the sensual pleasures of learning can be inherently more satisfying than anything posing as entertainment. He gives compelling evidence that America's greatest treasures are found, "not in our shopping malls, but in our libraries."

Certain that the greatest means we have of persuading others is to live by the example we advocate, Charles Hayes challenges each of us to re-evaluate our values and to amend our ambitions accordingly. Beyond the American Dream is a thoughtful summons to awaken from the New Age doctrines that have so engulfed our culture. It is a Book about the meaning of meaning and implores us to find purpose and meaning in life by leaving the world a better place than we found it.

Reviews of Beyond the American Dream: Lifelong Learning and the Search for Meaning in a Postmodern World