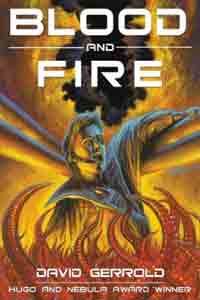 Synopsis of Blood and Fire

Executive Officer Korie had faced and defeated seemingly invincible Morthan battleships, elusive bio-computer imps, and dreaded Morthan assassins. It would be on the starship Norway, however, that he would meet his greatest challenge-a challenge that could change the outcome of a war and the destiny of humankind. The latest installment of the Star Wolf Series, this third galactic struggle concludes the popular trilogy with a rescue mission that is far from routine. Never before published, Blood and Fire is the long-awaited conclusion to the Star Wolf Series.

Reviews of Blood and Fire

Fortunately, Blood and Fire is a fast-moving, entertaining read, with strong characters whose actions have consequences for themselves and for others. -- Adam-Troy Castro, Scifi.com