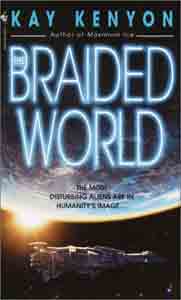 Synopsis of The Braided World

Heeding this cryptic message from deep space, the crew of the starship Restoration journeys from Earth to a distant planet, hoping to find humanity's lost genetic diversity. But with the human race on the verge of extinction from the twin horrors of plague and a mysterious scourge of dark matter, how can an alien world harbor any remedies for Earth's declining populations?

Worse, the Restoration arrives depleted: its captain is dead, its crew demoralized--except for an indomitable old woman whose power and wealth give her the privilege of naming the new captain. Anton Prados, a young, untested officer, will now preside over humanity's first contact with an alien race. An alien race that, improbably, looks exactly like humans. Only, the Dassa possess highly unusual breeding habits--and a reproductive process that seems to be the nullification of all that is human. And they think much the same about humanity...

Reviews of The Braided World

The Braided World is a comfortable read with believable characters, and I enjoy its ideas. But the characters sometimes navigate the story awkwardly, particularly in the final few dozen pages. -- Mervius, The Fantasitca Daily

The audience will feel that Dassa society exists and Author Kay Kenyon has visited the realm she has written about in her novel THE BRAIDED WORLD, which enable the audience to experience second hand this alien but fascinating orb. -- Harriet Klausner, AllScifi.com

The Braided World is a solid engaging story that impressed me with it's thoroughly thought-out, complex alien culture. -- Terry Baker, The Alien Online