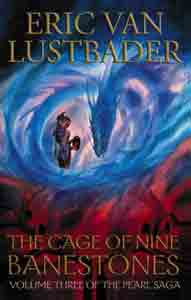 The Cage of Nine Banestones: "The Pearl Saga" Volume Three

Synopsis of The Cage of Nine Banestones: "The Pearl Saga" Volume Three

The third volume in this huge new fantasy in the tradition of Frank Herbert's phenomenal DUNE Series. For one hundred and one years the Kundalans have lived under the oppressive yoke of the V'ornn invaders. But according to prophecy a saviour, the Dar Sala-at, will arrive at their hour of greatest need. And by the forging together of two souls - those of a V'ornn prince and a young Kundalan woman named Riane - this hero has now been incarnated. The prophecy dictates that the Dar Sala-at can succeed in her quest to deliver her people only if she finds the mysterious Pearl, given to the Kundalans by their Goddess, Miina, but missing since the V'ornn invasion. Legend has it that the Pearl is to be found behind the Storehouse Door, but when Riane is finally able to enter, having faced the Hagoshrin, the Pearl's fearsome and monstrous guardian, she is shocked and horrified at what she discovers. Meanwhile the sauromicians, a secret society of outcast sorcerers, are plotting the Dar Sala-at's downfall. At their disposal they have eight ancient banestones, recovered from the sacred buried city of Za Hara-at. Each stone is a source of immense malevolent power, but if the sauromicians find the final missing stone, all nine together will form an engine of unimaginable destruction, bringing doom to Kundala and all of her inhabitants. Although beset by enemies on all sides, Riane is aided in her quest by a loyal and loving group of trusted friends, both V'ornn and Kundalan. Together they are committed to overcoming the dangers in their path to ensure that Riane fulfils the prophecy and Kundala is released from peril.

Reviews of The Cage of Nine Banestones: "The Pearl Saga" Volume Three

...the Book should appeal to any true fantasy readers that are looking for something a bit more complex, set in a world that deals with issues that are thought-provoking and magnificently different from our own. -- Vegar Holmen, The Alien Online