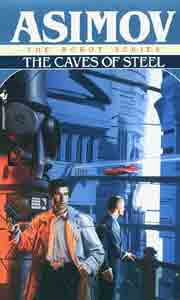 The Caves of Steel

Synopsis of The Caves of Steel

A millennium into the future two advancements have altered the course of human history: the colonization of the galaxy and the creation of the positronic brain. Isaac Asimov's Robot novels chronicle the unlikely partnership between a New York City detective and a humanoid robot who must learn to work together. Like most people left behind on an over-populated Earth, New York City police detective Elijah Baley had little love for either the arrogant Spacers or their robotic companions. But when a prominent Spacer is murdered under mysterious circumstances, Baley is ordered to the Outer Worlds to help track down the killer. The relationship between Life and his Spacer superiors, who distrusted all Earthmen, was strained from the start. Then he learned that they had assigned him a partner: R. Daneel Olivaw. Worst of all was that the "R" stood for robot--and his positronic partner was made in the image and likeness of the murder victim!

Though it is a bit dated (I got a good snicker when a scientist uses a slide rule), I can see why this is such a quintessential sci-fi novel. Asimov's view of the future is magnificent. The Book is essentially written in the form of a detective novel. Though the characterization is good, the plot is relativly elementary (I figured out who the murderer was almost immediatly), but that really is not the point of the novel. It's true purpose is to present the reader with an exposition of Asimov's future while taking a few jabs at the contemporary issues of socialism and communism.

Reviews of The Caves of Steel

As a whodunit, the story is weak. But then, the crime of murder is only the justification to explore Asimov's Strange New World and the men and Robots within it. -- Strangewords.com

If you hate science fiction, then you should not read The Caves of Steel. If, on the other hand, you enjoy both science fiction and mysteries, then you might want to double your pleasure with this Book, since it without question falls into both genres at once. -- Tim Converse, MysteryGuide.com

This is Asimov in top form. -- Jandy's Reading Room

One of the most famous and popular of SF's enduring classics, The Caves of Steel , Isaac Asimov's 11th novel, is a prime example of virtually flawless storytelling and is even held by some to be the best novel Asimov ever wrote. -- T. M. Wagner, SFReviews

I cut my sci-fi teeth on Asimov, and The Caves of Steel is as good today as it was when I read it for the first time back in fifth grade. -- Kenneth Newquist, Scifi.com