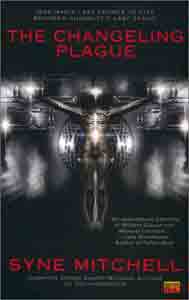 Synopsis of The Changeling Plague

Back CoverThe Beijing Treaty of 2013, passed unanimously by the nations of the civilized world, prohibits viral engineering, believed responsible for planetary plagues that decimated the human population. Rogue geneticists nevertheless continue to engage in illegal experimentation with DNA...

Geoffrey Allen is a millionaire able to buy almost everything his heart desires. But the one thing he hasn't been able to buy is a cure for the cystic fibrosis that is slowly killing him. The variant of the disease destroying his lungs is immune to every known--and legal--medical cure. Now, desperate and scared, with nothing left to lose, Geoffrey injects himself with an illicit viral treatment designed to reprogram his DNA.

Seemingly cured, Geoffrey is the picture of perfect health. But those in contact with him begin to suffer from extraordinary diseases and deformities that are hereditary in nature--even though they have no history of such ailments in their families.

The virus Geoffrey carries is rewriting the DNA of everyone he encounters, and it's spreading...

Author's NotesThe idea for this novel came to me in the car, as so many fiction ideas do. I'd always been fascinated by genetics, and had recently re-read Larry Goonick's A Cartoon Guide to Genetics. Retroviruses are amazing little machines. Too small to carry their own reproduction DNA, they sneak their RNA into their victim's DNA and hijack the victim's own cellular machinery to make more copies of themselves. The comparison to computer hackers was inevitable. Then I heard bacteria are able to swap genes in order to exchange resistance to antibiotics. Gene-swapping, viruses, what would happen if a virus could swap genes between its victims?

Because I don't have formal training in genetics, I contacted researchers at the University of Washington genetics labs. They were wonderfully helpful in letting me tour their facilities and answering my many technical questions. What was scary, though, was when I presented my idea of a gene-swapping virus, to the first geneticist, he cocked his head and said, "Yeah, that could happen."

Reviews of The Changeling Plague

This is a powerhouse novel. -- Harriet Klausner, AllScifi.com

Using her amazing ability to make the complex fathomable, Mitchell once again takes us off on, yes, a high tech countdown to disaster, but also a study of harrowing moral choices. -- Lisa DuMond, MEViews

...The Changeling Plague is an intelligent, fast-moving Book that ultimately does not go where the reader expects. -- John C. Snider, Scifidimensions

... this Book is a real winner; suspense, action, great characters and an unbelievable story made believable by an Author that I think will take the genre by storm if she continues writing Books like this. -- Vegar Holmen, The Alien Online