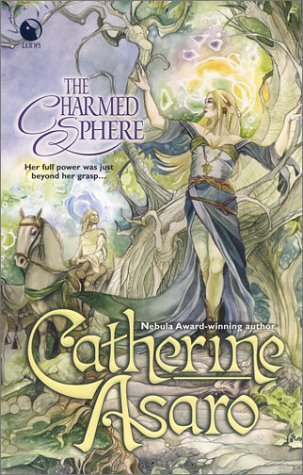 Synopsis of The Charmed Sphere

What was the use of being a powerful mage if you couldn't learn the spells?

Once Chime had been the most promising mage in the land, feted and celebrated for her potential and future role in the kingdom. The Iris, he young competitor, made a stunning leap in skill and turned Chime's world upside down.

Now no longer the most powerful, no longer promised to a prince -- and still unable to harness her magic properly -- Chime was set adrift. As was the new king's cousin -- and former heir -- Lord Muller. Yet when the neighboring kingdom threatened war, Muller and Chime were tasked with uncovering the plot. Both were flawed, yet unwilling to accept a lesser destiny than they had once known. Could this quest be the opportunity for redemption -- or would it lead them to their deaths?

Reviews of The Charmed Sphere

A magical bit of escapism. -- Lesley Mazey, The Eternal Night

I almost expected the characters to bump into Snow White or Sleeping Beauty; it felt like Asaro had rented out a Disney animated movie set. -- Susan Scribner, The Romance Reader

While traditional fairy-tale elements are thrown about with abandon, Asaro's skillful handling of these clich's merges them into a light, enjoyable romantic fantasy about the healing power of love. -- Jen Talley Exum, Romantic Times Book Club

The two lead couples of this unusual romance form a strong set of characters to guide the story. -- Detra Fitch, The Huntress Reviews