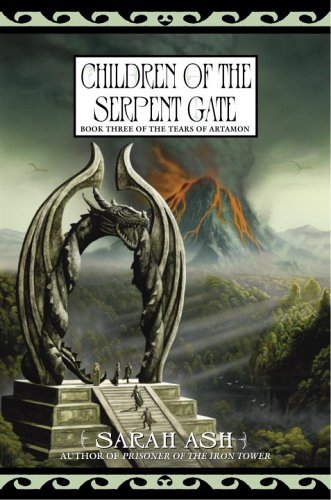 Children of the Serpent Gate

Synopsis of Children of the Serpent Gate

In this third novel in her acclaimed Tears of Artamon saga, Sarah Ash once again transports readers to a realm where sorcery collides with political intrigue...and where one man haunted by a dark legacy is locked in a fierce struggle between the forces of good and evil battling for supremacy within him....

Gavril Nagarian is believed dead...perished in the heat of battle. But the Lord Drakhaon of Azhkendir lives on. Now he is entrusted with a sacred mission: to rescue the aged Magus, who has been kidnapped and in whose possession are the five priceless rubies that compose the fabled Tears of Artamon. Ancient law decrees that whoever possesses the coveted stones has the power to impose his rule over the five princedoms in the Empire of New Rossiya.

But the task exacts a cost. The Drakhaoul that destroyed his forebears has penetrated Gavril's psyche and is gaining power over his soul. With the dark forces inside him seeking immortality, Gavril must feed on the blood of innocents...or die.

Toppled by the loss of the Tears of Artamon, Emperor Eugene of Tielen is tormented by his own daemon. Now he must defend his lands against King Enguerrand of Francia, who claims ownership of the Tears. But both men share a common goal: to destroy Gavril Nagarian and the Drakhaoul that lives within him once and for all.

Ingenious and unforgettable, Children of the Serpent Gate delivers a thrilling conclusion to the epic trials of a man of honor in a world run amok...a calamity that can be laid to rest only by an Emperor's Tears.

Reviews of Children of the Serpent Gate

Sword and Sorcery fans, high fantasy enthusiasts and readers who want to be enthralled in the tradition of Mercedes Lackey and Robin Hobb will find CHILDREN OF THE SERPENT GATE a memorable reading experience. -- Harriet Klausner, Harriet Klausner's Review Archive

Fans of the Series will enjoy this stirring conclusion, but there's not much here of interest to those not already invested. -- Natalie A. Luhrs, The Romantic Times Book Club