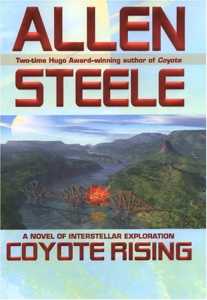 Synopsis of Coyote Rising: A Novel of Interstellar Revolution

The crew of the hijacked starship Alabama fled their colony on Coyote after more colonists arrived-along with a new, repressive government and all of Earth's social ills. Now, the iron-fisted colonial governor is building a bridge to exploit the virgin territory where the Alabama's crew are believed to have resettled.

But a movement is underway to reclaim Coyote for those who truly love freedom-a full-scale rebellion in which the men and women on both sides of the fight will learn the true price of liberty.

Reviews of Coyote Rising: A Novel of Interstellar Revolution

Though the Book starts out grimly, with as many tales of loss as redemption, it finds its footing soon enough and sweeps you along in this story of colonial revolt. -- Ernest Lilley, SFRevu

The trouble is that the gravity fields of the stories are so strong that they slow the novel down, and it never achieves escape velocity. -- Paul Witcover, Scifi.com

Just as in the first Book, Steele combines the adventures of discovery with the psychology of the human dynamic to create a work that should appeal to both science fiction aficionados and general readers. -- Mark Graham, Rocky Mountain News