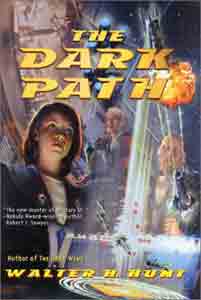 Synopsis of The Dark Path

Walter Hunt's debut novel, The Dark Wing was favorably compared to Ender's Game, Babylon 5, Honor Harrington, and C. S. Forester . . . and the story isn't over yet!

Man and zor, once sworn enemies engaged in a mutual campaign of xenocide, now live side by side.

The war is over, and Admiral Marais, the legendary "Dark Wing"--both Angel of Death and Species Savior--is long dead, though some of his companions and participants in that great war still survive and have even chosen to live among the zor.

Now a mystery from the past has become a threat to the present when an unholy menace jeopardizes both humans and zor alike.

And now man and zor alike must join forces to meet this adversary head on. . . .

Walter Hunt lives in the suburbs of Boston, Massachusetts. The Dark Path is the sequel to The Dark Wing, his first novel.

Reviews of The Dark Path

Obviously the military crowd will enjoy this thriller, but outer space sci fi fans will appreciate the novel too. -- Harriet Klausner, BooksNBytes

With The Dark Path Walter Hunt has once more delivered a riveting novel worthy of the military SF genre. -- Bruce Wallace, SFRevu