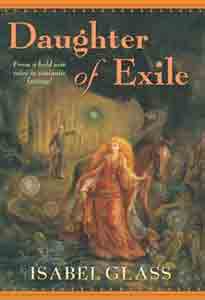 Synopsis of Daughter of Exile

An extraordinary talent bursts on the fantasy scene with a remarkably engaging novel.

Lady Angarred Hashan was raised in exile far from Pergodi, the capital city. Angarred never knew what had caused her father's exile; she only knew that at the age of four, she was brought to Hashan House, an isolated and crumbling manor, and raised by servants. Her mother, she was told, had died. Angarred spent hours in her mother's rooms, handling the fine dresses of Emindal cloth---when she wasn't running wild through the forests and fields. Her father was distant and obsessed with regaining his place at court. The only visitors they ever saw were secretive men and women who brought news of the events at court---news of wars and alliances, of the queen's failure to conceive an heir, of the Princess Roharren's madness and Prince Norue's growing power, and of the disappearance of the magicians. The visitors came and went, plotting revenge for mysterious slights, eating and drinking their way through the storerooms while Hashan House fell down around them. But one day, while hunting in the forest, Lord Hashan was murdered. And Angarred, in her outrage, determined to go to the capital and seek justice from the king---for, surely, the murderer of a lord, even an exiled lord, should be punished! But the na...ve young woman finds a swirling world of palace intrigue, a dying queen, and an ensorcelled king. With the help of Mathewar, a handsome but very troubled, magician, she journeys from the crowded streets of Pergodi to the Enchanted Forest, from the deadly land of the Others to the arches of the Giant's Bridge, as she begins to unravel the secrets of the kingdom and her own history.

Reviews of Daughter of Exile

DAUGHTER OF EXILE is a very complex entertaining romantic fantasy with so many twists and turns that it is impossible to predict what will happen next. -- Harriet Klausner, Allscifi.com

Characterization is a little weak, and alliances are formed almost too easily, but overall this is an exciting first novel. -- Jen Talley Exum, The Romantic Times Book Club

Glass's writing is occasionally very strong but she sometimes oversimplifies her construction, letting the reader feel that he/she is being taken through a young adult title rather than a serious work of fantasy. -- BooksForABuck