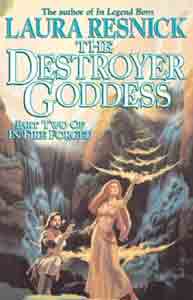 Synopsis of The Destroyer Goddess: In Fire Forged, Part 2

Laura Resnick, Author of In Legend Born, has created a novel so epic in power and scope that it could only be told in two parts. In The White Dragon, part one of In Fire Forged, the island nation of Sileria had finally been freed from the tyranny of foreign Valdani rule by Josarian, the rebel leader who became the Firebringer foretold in prophecy. But Josarian was slain by the White Dragon, a creation of Kiloran, the most ruthless of the powerful mages called waterlords, who terrorize those who depend on their mercy for the water that all life must have. Now that mercy is denied.As the waterlords begin a reign more terrible than that of the Valdani, Tansen, Josarian's second-in-command, joins forces with Mirabar, a Guardian who is feared and admired for her fire magic, and Zarien, a mysterious sea-born boy.Mirabar and her bitter enemy, Torena Elelar, the faithless wife of a Valdani aristocrat, contend with prophecies both vague and daunting, each destined to serve the destroyer goddess in her own way as they try to discover the meaning of Mirabar's visions. The fragile alliances forged by Tansen between the peasant shallaheen and the Guardian resistance begin to crumble as he tries desperately to save Sileria. Zarien, however, is determined to bring Tansen to the sea goddess Sharifar to be her consort. But no goddess is as easy to placate as mortals may think . . . . And Kiloran will stop at nothing to trap Tansen and crush the resistance in order to maintain his tyrannical reign.As the power struggle among Sileria's warring factions intensifies to a fevered pitch, the tremors of Mount Darshon increase, threatening to engulf them all in molten death. Kiloran and Tansen prepare for a final confrontation that will change Sileria forever. But no one may triumph unless the destroyer goddess wills it . . . .

With masterful storytelling, Laura Resnick brings this great epic tale to a conclusion that readers will find riveting and enthralling.

Reviews of The Destroyer Goddess: In Fire Forged, Part 2

THE DESTROYER GODDESS is the strongest of the three novels in this Series. -- BooksForABuck

Though the tale contains the high level of action expected from a fantasy, THE DESTROYER GODDESS: IN FIRE FORGED also includes strong fabulous characters that interrelate in an intelligent, at times emotional, manner but appear reasonable. -- Harriet Klausner, BooksNBytes

will wars with vague prophecy and divine intervention in this epic romantic fantasy, which will stay with readers long after the satisfying conclusion. -- Jen Talley Exum, Romantic Times Book Club

Yes, people, most of the genre consists of formulaic pulp like this. -- Jennifer Howell, SFCrowsnest