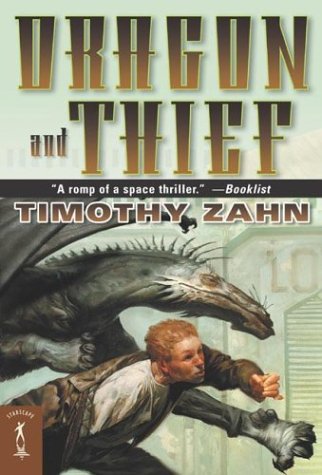 Synopsis of Dragon and Thief

Timothy Zahn has been entertaining science fiction readers young and old for more than twenty years with exciting, thought-provoking adventures; now, with Dragon and Thief he offers his first new Series in a number of years, one that's sure to delight all his fans and gain new readers as well. It's called Dragonback because Jack Morgan has a dragon on his back--literally. We think of dragons as enormous fire-breathing, flying creatures of myth. But in Jack's universe, dragons--or, more precisely, the dragon like K'da--are big, but they also depend on being in a symbiotic relationship with a humanoid. And when the K'da warrior known as Draycos is the sole survivor of a space battle and must find a new bondmate or die, for better or worse Jack happens to be the only available host.

They may be an odd couple, but together they're more than the sum of their parts; they are destined to travel far and wide, facing many perils--human, alien, and other, as they seek justice and safety--Jack for himself, and Draycos for his people.

Reviews of Dragon and Thief

Zahn has no trouble keeping the sense of adventure up and the action moving. -- Ernest Lilley, SFRevu

It's a good lighter read with some effective hooks for the forthcoming tomes. -- Eva Wojcik-Obert, Fantastica Daily

Not knowing this was a basically a YA novel made it hard to get into at first. Once I realized this, though, I easily flicked my brain back to the age of 14 and had fun. -- Tobias S. Buckell, Scifi.com