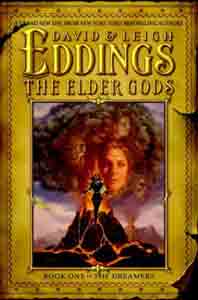 The Elder Gods: Book One of the Dreamers

Synopsis of The Elder Gods: Book One of the Dreamers

New Series, new world, and a glorious story destined to reach the biggest audience yet. The Dreamers teeter on the brink of divinity. They have the power to change the world with their dreams. They look like children. They are, in fact, sleeping gods. The Dreamers are an apparition designed to fool the Lord of the Wasteland who plans to use the moment of the divinities' waking to destroy them. At that moment, he can do it, but no other. If he gets it right, the Lord of the Wasteland can destroy both the sleepers and the other divinities that are already awake. Then the Lord of the Wasteland will be acknowledged as the god he knows himself to be. There are eight divinities altogether, and four of them are awake while the other four sleep for alternating periods of 25,000 years. The time for a switchover is approaching fast. There will be battle. There will be trickery and deception. Tribes of humans, creatures of the deep, the sea itself and the earth, the weather and the mood of the divinities, all will play their part in the epic struggle against the hive mentality of the Lord of the Wasteland. But the world is out of kilter, it is being dreamed, and the awakening of gods is no simple transition.

Reviews of The Elder Gods: Book One of the Dreamers

...not award-winning material, but if you are a fan of the Eddingses then it is exactly what you...ve come to expect, and therefore exactly the sort of thing I presume you like. -- Vegar Holmen, The Alien Online

The story may rattle along at a fair pace, but with wooden characters and flat dialogue, it totally fails to shine. -- Iain Emsley, SFRevu