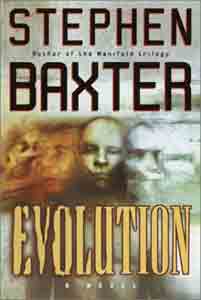 It's the job of a science fiction writer to visualize extrapolations of the future. But there are those who go far beyond, venturing into realms of breathtaking science. That kind of cutting edge talent is as rare as a supernova-and, in its own way, just as powerful. Arthur C. Clarke had it. So did William Gibson. Now, with Evolution, Stephen Baxter delivers what is sure to be one of the most talked-about Books of the year-and shows once again why he belongs among the select company of science fiction writers who matter.

Stretching from the distant past into the remote future, from primordial Earth to the stars, Evolution is a soaring symphony of struggle, extinction, and survival, a dazzling epic that combines a dozen scientific disciplines and a cast of unforgettable characters to convey the grand drama of evolution in all its awesome majesty and rigorous beauty.

Sixty-five million years ago, when dinosaurs ruled the Earth, lived a small mammal, a proto-primate of the species Purgatorius. From this humble beginning, Baxter traces the human lineage forward through time. The adventure that unfolds is a gripping odyssey governed by chance and competition, a perilous journey to an uncertain destination along a route beset by sudden and catastrophic upheavals. It is a route that ends, for most species, in stagnation or extinction. Why should humanity escape this fate?

A generation from today, a group of concerned scientists-distant descendants of that primitive Purgatorius-gathers on a remote island to discuss this very question. The ceaseless expansion of human civilization has triggered an urgent environmental crisis that must be solved now if the Earth is to survive as a place hospitable to human life. But just when a peaceful solution seems within reach, two acts of shocking violence set in motion a cataclysmic chain of events that will expose the limitations of human intellect and adaptability in the face of the blind and implacable processes of Darwin's dangerous idea.

...this is not a conventional novel. It is however a fascinating and compelling read for anyone interested in evolution, in exploring where we come from, how we got here, why we are what we are. -- Joe Gordon, The Alien Online

Another triumph for Mr. Baxter who has evolved into best-selling specie that Darwin would have enjoyed reading the Author's works. -- Harriet Klausner, Under the Covers

Baxter leaves you with a memorable yet unsettling sense of our insignificance in the scheme of things. -- PD Smith, The Guardian

...it's long, and avoids easy answers and happy endings, but it does provide food for thought, confronts our notions of what it means to be human, and gives warning that nothing can be taken for granted in the ongoing struggle for survival. -- John C. Snider , Scifi Dimensions

I recommend this novel to anyone who appreciates novels that take chances, novels that express big ideas. -- Edward Carmien, SFRevu

The miracle of Evolution is that it makes the triumph of life, which is its story, sound like the real story. -- John Clute, Wahington Post

What is astonishing is how successfully he brings to life a wide range of facts and conjectures, and how entertaining as well as informative this Book -- an episodic novel with evolution as its protagonist -- manages to be. -- Gerald Jonas, The New York Times

...the Books feels cynical and it lacks a soul. -- Sue Davies, SFCrowsnest

...I am left dubious about whether the Book's scientific accuracy contributes anything to its value as a work of literature. -- Nicholas Whyte, Infinity Plus