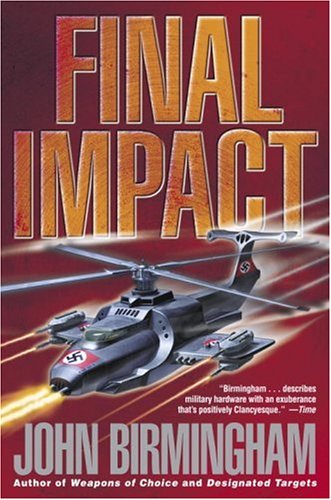 Picking up two years onwards from the end of Designated Targets, Final Impact is the last novel in the Axis of Time trilogy. The Big Hill has been refurbished and is to head back into battle, with Admiral Kolhammer back in command. Many characters have died in the intervening time period, from FBI Director J. Edgar Hoover, by his own hand to Commander Dan Black, one of the main characters of the story who asks for a return to combat and dies during the retakeover of Hawaii, when his plane crashed before it can take off from Muroc Airfield, California.

...he has finished the trilogy magnificently ... -- Jeff Glorfeld, TheAge.com.au

I enjoyed this story and highly recommend it and the other two Books in this Series. -- Willaim Lawhorn, SFRevu

John Birmingham very efficiently and satisfyingly brings to a climax all the threads he launched in the first two Books, but at the partial expense of some of the more interestingly SF and cultural angles he had been exploring. -- Paul Di Filippo, Scifi.com