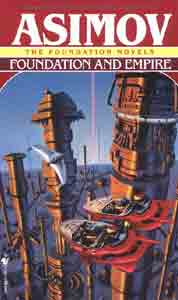 Synopsis of Foundation and Empire

Led by its founding father, the great psychohistorian Hari Seldon, and taking advantage of its superior science and technology, the Foundation survived the greed and barbarism of its neighboring warrior-planets.

Yet now it must face the Empire--still the mightest force in the Galaxy, even in its death throes. When an ambitious general determined to restore the Empire's glory turns the vast Imperial fleet toward the Foundation, the only hope for the small planet of scholars and scientists lies in the prophecies of Hari Seldon.

But not even Hari Seldon could have predicted the birth of an extraordinary creature called the mule--a mutant intelligence with a power greater than a dozen battle fleets...a power that couldturn the strongest-willed human into an obediant slave.

Reviews of Foundation and Empire

Bottom line: Second-best of the Foundation Books, and very near the top of the heap for Asimov overall. -- John H. Jenkins, Jenkins... Spoiler-Laden Guide to Isaac Asimov

I recommend Foundation and Empire as a good read, and as part of a classic SF trilogy. -- Steven P. Ross, Basilisk Dreams Books

Quite complex at times but well worth the effort. -- Paul Bonneau, Another Path

Asimov shows us in a thoughtful way that people do not fundamentally change. -- Jandy's Reading Room