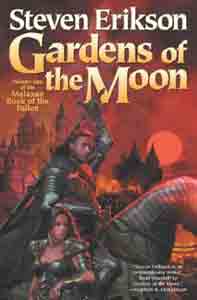 Gardens of the Moon (Malazan Book of the Fallen 1)

The Malazan Empire simmers with discontent, bled dry by interminable warfare, bitter infighting and bloody confrontations with the formidable Anomander Rake and his Tiste Andii, ancient and implacable sorcerers. Even the imperial legions, long inured to the bloodshed, yearn for some respite. Yet Empress Laseen's rule remains absolute, enforced by her dread Claw assassins.

For Sergeant Whiskeyjack and his squad of Bridgeburners, and for Tattersail, surviving cadre mage of the Second Legion, the aftermath of the siege of Pale should have been a time to mourn the many dead. But Darujhistan, last of the Free Cities of Genabackis, yet holds out. It is to this ancient citadel that Laseen turns her predatory gaze.

However, it would appear that the Empire is not alone in this great game. Sinister, shadowbound forces are gathering as the gods themselves prepare to play their hand...

Conceived and written on a panoramic scale, Gardens of the Moon is epic fantasy of the highest order--an enthralling adventure by an outstanding new voice.

Visit the Author's page at Tor

Gardens of the Moon is certainly a Book worth reading, as the first in the Series, or simply for itself. -- Neil Walsh, SF Site

Gardens of the Moon is by no means an instant classic but in it Erikson shows a lot of promise, enough insight and compelling detail to make me wonder, what will he do in parts two and three? -- Keith Brooke, Infinity Plus

Much of what he wrote resonated really well, and I can honestly say that I...m looking forward to at least the next Book, if not many more. -- Cindy Lynn Speer, Fantastica Daily

I genuinely hope that one day Steven Erikson produces a Book that thrills me as much as A Clash of Kings. But as far as Gardens of the Moon is concerned, I think most readers will only want to have a copy by their bedsides for those nights when they just can't get to sleep.... -- T. M. Wagner, SFReviews

If you like high fantasy, you should give GARDENS OF THE MOON a try. -- BooksForABuck