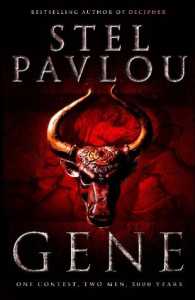 Detective James North is called upon to deal with a young, mentally unstable man holding a child hostage at New York's Metropolitan Museum of Art. When he arrives, he is disturbed to discover that - although the bad guy is a complete stranger - he's been asking for North by name. The hostage situation goes wrong, and North finds himself injected with a substance that causes hallucinatory nightmares and flashes of memory that are not his own. He begins to hunt through New York for his attacker, a man he feels inexplicably compelled to kill - a man called Gene. As he does so, North unlocks the secret of his past, a past that stretches back over 3000 years. GENE is the story of forgotten Greek warrior Cyclades who fought and died in the Trojan Wars, and was fated by the gods to be reincarnated seven times. Locked in a cycle of battle with the Babylonian Magi Athanatos, Cyclades must once again strive to defeat him and thwart his quest to achieve immortality. Cyclades and Athanatos. North and Gene. But in this incarnation, neither man knows which is which, or why each of them has the instinctive need to kill the other.

I enjoyed this one a lot - it's gripping, edge-of-the-seat stuff! -- John Berlyne, SFRevu

This is a stunningly compelling story that demands your full attention right to the very last page. -- Lesley, The Eternal Night