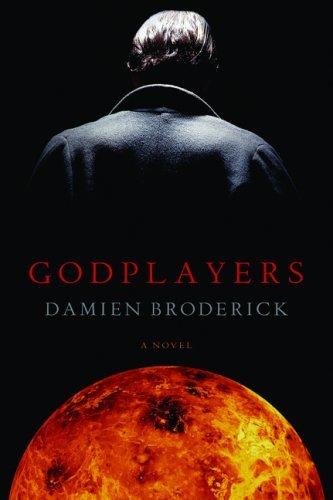 August Seebeck is in his twenties, a man of average looks and intellect. Then comes the claim of his great-aunt Tansy that she has been finding corpses each Saturday night in her bath (they vanish by morning). August dismisses this tale as elderly fantasy until he stumbles upon a corpse being shoved into the second-floor bathroom window of his aunt's house. Even that wouldn't faze him, but then someone steps out of the mirror.... August suddenly discovers he is a Player in the multi-universe Contest of Worlds and that his true family is quarrelsome on a mythic scale. His search for understanding follows a classic quest pattern of the Parsifal kind, except that August is nobody's fool.

An epic quest that is funny and engrossing, Godplayers is in the best tradition of Zelazny, Van Vogt, and the Knights of the Round Table, from one of science fiction's hottest up-and-coming writers.

Godplayers is great fun at times, and one can't help admiring the Author's erudition and intelligence, but the frustration level mounts as one waits in vain for a story or plot to develop and for characters, including August, to display any hint of a genuine inner life as they move randomly from scene to scene, world to world, reality to reality. -- Paul Witcover, Scifi.com

...with Broderick you will at least get a lot of fun, and much to think about. -- Cheryl Morgan, Emerald City