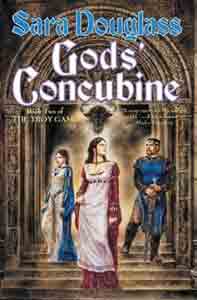 From ancient Greece they came, remnants of the glorious Trojans. Led by Brutus, Kingman, holder of the bands of gold that wield the very magic of the Gods, these travelers are bowed but not broken, and they have come to Albion to begin anew. A vision of beauty called them to create a new Troy, and when they landed on the shores of the land that became Britain, they found an old magic that was fading. And so they began to construct a new Labyrinth, a place of magic that will bring unimaginable power to those who can control it.The temptress who brought Brutus to this land seeks to use him for her own purposes, but in that she fails, for it is the bride of Brutus who dooms the completion of the labyrinth . . . and sends all the players in this drama---handsome Brutus, his beautiful wife, Cornelia, and the sensuous and deadly Genvissa---into a hell of death and rebirth, until the Labyrinth is completed and the ancient magic is set free.A thousand years pass. Cathedrals rise in place of mud and wattle huts, hymns to saints replace odes to Celtic and Greek gods. But the magic from the dawn of time waits, and the players are not yet done with their destinies. They have new faces and new bodies, but old souls---and not all who have come back remember their parts in this drama. There are kings and princes, deadly court intrigues, and ancient powers awoken.And a warrior across the sea who only waits for his opportunity to finish what was started centuries before . . .

This central Book of The Troy Game accomplishes so much toward completing the Series, filled with magic, myth and romance. I find myself eagerly waiting for next chapter. -- Cindy Lynn Speer, Fantastica Daily