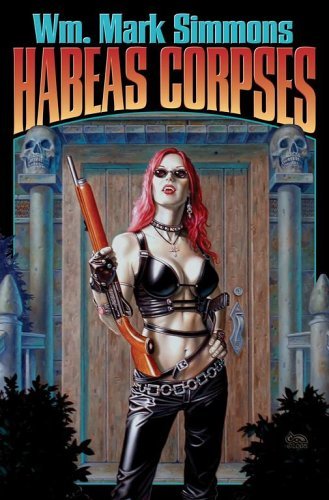 Two years ago Christopher Cs...jthe survived a blood transfusion with a vampire only to discover that he was infected with one of the two viruses that transform the living into the undead. Since then he has survived by his wits as men, monsters, and government agencies have hunted him for the secrets his mutated blood may hold. His personal life is almost as troublesome as the assassins that turning up in ever increasing numbers: his bodyguard is a sexy vampire, his jealous werewolf lover can't abide his touch after a silver bullet poisons his blood, and the ghost of his dead wife is still hanging around, offering odd bits of advice. The "neighbors" from the cemetery next door tend to drop by every night and someone is sending him grotesque messages in the form of dismembered body parts that are still alive! Being almost undead has provided a coffin-load of challenges, blending humor and horror in his two previous outings, One Foot in the Grave and Dead On My Feet. This time around an assassin's bullet knocks Csejthe out of his body and into the afterlife as he journeys through the realm of the truly dead before a final showdown with an evil spawned in Nazi Germany. An evil kept alive through genetic manipulation and nanotechnology and waiting only for Csejthe's blood to overcome the last hurdle to immortality!

This is the third Book (See One Foot in the Grave and Dead on My Feet) to star Christopher Csejthe and it is just as satirically funny as the first two novels in the Series. -- Harriet Klausner, SFRevu