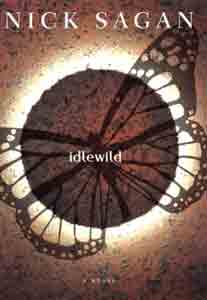 From a bold new talent comes a smart, stylish near-future thriller that fuses the fierce imagination of The Matrix with the chilling social vision of Minority Report.

Set in the day after tomorrow, Idlewild opens as a young man awakes with amnesia: He cannot remember who he is and doesn't recognize anything around him-all he knows for sure is that someone is trying to kill him. Not certain whom he can trust, he becomes reacquainted with eight companions, all of whom are being trained at a strange school run by an enigmatic figure named Maestro. Working to uncover the identity of the person who has attempted to murder him, the young man quickly starts to unravel a Series of truths, making it clear that much more than just his life is at stake.

Taking the best of the genre and transcending it, Sagan's cool debut will appeal to fans of Neil Gaiman and Orson Scott Card, while also drawing in readers of novels such as House of Leaves by Mark Danielewski and Lullaby by Chuck Palahniuk.

Despite a slightly disappointing ending, Idlewild is a strong debut that should make readers eager for the next entry in what is expected to be an Idlewild trilogy. -- Gavin J. Grant, Bookpage

Despite its sometimes heavy-handed treatment, this imaginative yet uneven addition to the genre possesses enough brio in places to ultimately make it a worthwhile read. -- Andrea Hoag, The San Francisco Chronicle

''Idlewild'' is long on visuals, short on narrative logic and, surprisingly, weak on science. -- Gerald Jonas, The New York Times

Good stuff from a writer with a bright future. -- Bob Rhubart, BookReporter.com

Terrible plot, few decent ideas, thin characterisation, but worth trying if you like highly affected media-friendly-post-cyberpunk (for want of a better term) prose but someone who does show promise as an Author. -- Dave Kennedy, DKennedy.org

As a novel, this is one of the best I've read all year. As a debut, it's utterly astonishing. -- John Toon, Infinity Plus

Some of the science is unconvincing, a couple of similes seemed a little forced and I thought the ending was anti-climactic. -- Ron Bierman, Rambles

Idlewild builds, not just in tension but in what it demands from the reader, ending up as a dark exploration of hidden realities, while throwing in a global plague and enough teenage angst to flood Dawson's Creek. -- Jon Courtenay Grimwood, The Guardian