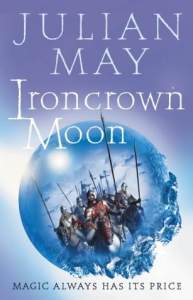 The continuation of a powerful new fantasy adventure filled with dark magic and deadly intrigue, from the worldwide bestselling Author of the Saga of the Pliocene Exile. King Conrig 'Ironcrown' of Cathra now rules the entire island of High Blenholme. The young king is turning out to be a cruel and ruthless opportunist and has plans for further expansion into the continent to the south of his kingdom. However, his rule is not entirely unchallenged. There are rumours that his vengeful first wife, Maudrayne, believed to have committed suicide when she discovered his infidelity, is in fact alive and in hiding in the remote province of Tarn. Furthermore, it is believed she has given birth to Conrig's first son -- under Cathran law the child would be the legitimate heir to the throne, displacing the twins who have since been born to Conrig's second wife. The king despatches his royal intelligencer, Deveron -- a man secretly possessed of magical abilities -- to discover the truth, and to kill Maudrayne and the child if he finds them.

There can be no question that Julian May is a master of the machinery of fantasy writing, there is a doubt however about the soul of her writing, her passion, her ability to elicit emotion. -- Rafe Conn, SF Revu

This is a great read for anyone who enjoys complex fantasy. -- Colleen Cahill, SF Revu