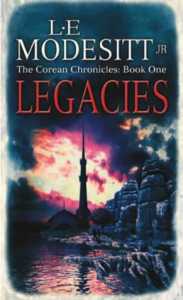 Legacies (The Corean Chronicles, Book One)

Synopsis of Legacies (The Corean Chronicles, Book One)

Millennia ago, a magical disaster caused the fall of a great civilization that spanned a continent, and ended a golden age. Corus today is a world of contending countries, of struggling humans, strange animals and elusive supernatural creatures. Though much has been forgotten, it is still a place of magical powers, and of a few people who are Talented enough to use them.

Even as a child, Alucius showed very strong Talent. He was warned never to reveal it, lest others seek to exploit it. But as he grows to young manhood, Alucius must serve in the Militia like his father before him. When his country is invaded by the slave armies of the Matrial, immortal ruler of a nearby land, Alucius is captured and magically enslaved.

A time of changes has come upon all of the world of Corus. If the evil surrounding the Matrial is not ended, those changes will not be happy ones. Alucius and his Talent have a central role to play.

Reviews of Legacies (The Corean Chronicles, Book One)

The reader spends the whole novel turning pages in a zombie-like trance waiting for something interesting to happen, only to find he's reached the back cover. -- Martin Jenner, SF Crowsnest

I really enjoyed the adventure despite the fact it is mostly a set up Book for the Series, and I really am looking forward to the rest. -- Cindy Lynn Speer, SF Site

You know how certain Books capture your attention, holding through 'till the last page, and you're sorry to close the Book because it was so good? That pleasure doesn't happen too often, does it? But this Book is one of those special ones I didn't want to put down. -- KC Heath, Yet Another Book Review Site

Initially I will admit that I thought I had read this Book before, however when all was said and done I felt that I could honestly say that this was the beginning of a brand new Series and I was glad for it. -- Bruce Wallace, SF Revu