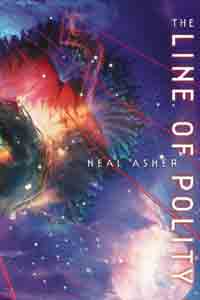 Synopsis of Line of Polity

Come visit a world where you cannot draw breath . . . should its horrifying wildlife allow you.

Outlink station Miranda has been destroyed by a nanomycelium, and the very nature of this sabotage suggests that the alien bioconstruct Dragon - a creature as untrustworthy as it is gigantic - is somehow involved.

Sent out on a titanic Polity dreadnought, the Occam Razor, agent Cormac must investigate the disaster, and also resolve the question of Masada, a world about to be subsumed as the Line of Polity is drawn across it.

But the rogue biophysicist Skellor has not yet been captured, and he now controls something so potent that Polity AIs will hunt him down forever to prevent him using it.

Meanwhile on Masada, the long-term rebellion can never rise above-ground, as the slave population is subjugated by orbital laser arrays controlled by the Theocracy in their cylinder worlds, and by the fact that they cannot safely leave their labour compounds. For the wilderness of Masada lacks breathable air...and out there roam monstrous predators called hooders and siluroynes, not to mention the weird and terrible gabbleducks. Full of colourful ideas, bizarre locations and enthralling action

Reviews of Line of Polity

Neal Asher has turned in another romping yarn. -- Sandy Auden, The Alien Online

The rivetting story is interwoven with a sly and revealing snippet at the start of each chapter that sometimes seems to be the only consistent truth in The Line of Polity. -- Lisa DuMond , MEViews

For those who hanker for some pure SF entertainment that uses its brain without forcing the reader to over-exert theirs, The Line of Polity is pretty hard to beat. -- John Toon, Infinity Plus

I read this quickly and passionately and put it down at the end very satisfied. -- Thomas L. Martin, SFCrowsnest