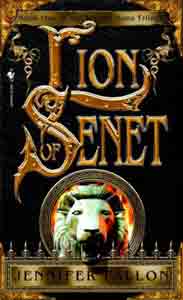 The Lion of Senet (The Second Sons Trilogy, Book 1)

Synopsis of The Lion of Senet (The Second Sons Trilogy, Book 1)

On the world Ranadon there is no night as both suns shine brightly. The intervention of Belagren, High Priestess of the Shadowdancers, and the sacrifice of a child of royal blood, has banished the Age of Shadows from the skies. Belagren's position is unquestioned . . . until circumstances begin to tip political rivalries into a deadlier game altogether.

A volcanic eruption rocks the seas separating the Kingdom of Dhevyn and the mainland Kingdom of Senet, and a mysterious sailor is shipwrecked on the island of Elcast. Badly wounded, his arrival stirs up old hatreds and unravels old secrets. His presence is enough to even bring Antonov, the powerful Lion of Senet, to the island and fear to the Keep of the Duke of Elcast.

This first Book of the Second Sons Trilogy establishes Jennifer Fallon as one of the most unique voices in fantasy fiction, as she creates full characters, and takes intelligent plotting to a whole new level in order to establish unparalleled complexity and tension.

Reviews of The Lion of Senet (The Second Sons Trilogy, Book 1)

Though the last third of the Book makes a tolerable adventure story, it isn't worth suffering through the first two thirds to get to. -- Madeline Yeh, SFRevu

The pacing is well done, and while the timing of several events feels too perfect or coincidental, the story is a highly enjoyable read, one I know I'll read again and again. -- Jo Brooks, Fantastica Daily

It takes more than one hundred pages just to get to the real plot. -- Beth Larkin, About.com

The cover blurb compares Fallon to George R.R. Martin and Guy Gavriel Kay and this is not a bad comparison. -- Sue Bursztynski, January Magazine

There are many threads woven through the story, including a huge cast, but Fallon keeps them from tangling with deft plotting, strong world-building and stand-out lead characters. -- Jen Talley Exum, Romantic Times Book Club