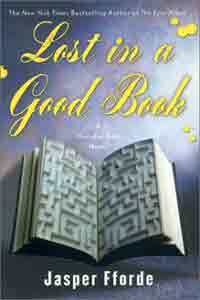 Lost in a Good Book

Synopsis of Lost in a Good Book

If Thursday thought she could avoid the spotlight after her heroic escapades in the pages of Jane Eyre, she was sorely mistaken. The unforgettable literary detective whom Michiko Kakutani of The New York Times calls "part Bridget Jones, part Nancy Drew and part Dirty Harry" had another think coming. The love of her life has been eradicated by Goliath, everyone's favorite corrupt multinational. To rescue him Thursday must retrieve a supposedly vanquished enemy from the pages of "The Raven." But Poe is off-limits to even the most seasoned literary interloper. Enter a professional: the man-hating Miss Havisham from Dickens's Great Expectations. As her new apprentice, Thursday keeps her motives secret as she learns the ropes of Jurisfiction, where she moonlights as a Prose Resource Operative inside Books. As if jumping into the likes of Kafka, Austen, and Beatrix Potter's Tale of the Flopsy Bunnies weren't enough, Thursday finds herself the target of a Series of potentially lethal coincidences, the authenticator of a newly discovered play by the Bard himself, and the only one who can prevent an unidentifiable pink sludge from engulfing all life on Earth.

The inventive, exuberant, and totally original literary fun that began with The Eyre Affair continues with Fforde's magnificent new adventure, the second installment in what is sure to become a classic Series of literary fantasy.

Reviews of Lost in a Good Book

...for the most part, this is light, quick, enjoyable reading, directed primarily at literature and fiction in all its myriad aspects. -- William Thompson, SF Site

The story is full of wonderful comedic moments. -- Nigel, Booklore

It's a hard plot to summarize and truth to tell is so brilliantly inventive and off-the-wall that there's not much point in trying! -- John Berlyne, SFRevu

People without a working acquaintance of Dickens, Bront..., Lewis Carroll and Poe are as likely to be irritated as entertained, as if they'd been asked to work a crossword with unnecessarily esoteric clues. -- Lloyd Rose , Washington Post

Classifying this Book poses a dilemma. Is it Science Fiction? Literature? Romance? It doesn't matter. Lost in a Good Book is, simply, a good Book that will appeal to readers of these and other genres. -- Trisha Ping, Bookpage

The new Book is easier to put down than the first, but it's still an enjoyable read, different from anything anyone else is writing. -- Judith Evans, St. Louis Post-Dispatch

If Thursday's adventures prove nothing else, it is that reading can be wonderfully exciting, a lot of fun, and a welcome, maybe even necessary, distraction from our quotidian cares. -- Frank Wilson, Philadelphia Enquirer

There is a certain self-delighted quality to all this cleverness that would probably become annoying if Fforde weren't so resolutely unclever about his own writing. -- Bruno Maddox, The New York Times