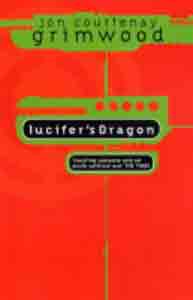 Passion di Orchi is no more then the obscenely rich daughter of a West Coast mafia boss - until she decides to rebuild Venice...

...in the middle of the Pacific.

A century later, with New Venice ossified into a puritanical elegance, the daughter of Count Ryuchi slips away from her father's palazzo, out to the levels to play Lucifer's Dragon. A multi-level self-perpetuating, true 3-D trawl through the apocalypse, Lucifer's Dragon is coded so the game never repeats its own failures. But an altercation in a bar puts Karo on a collision course with NVPD officer Angeli, drafted in by media giant CySat to investigate a murder she knows way too much about.

And then there's Razz, the silver exotic. Too tired and jaded to keep living, she takes on the job of guarding CySat's ultimate boss, the ten-year-old Aurelio. with all the high tech security in place, it should be a walk in the park. But the last thing Razz sees is CySat's child-ruler making too close an auquaintance with an Uzi, and then she wakes up in Zurich. Dead...

This is a promising early novel and a good indication of the reasons for following of readers Grimwood has accrued with his later novels. -- Pauline Morgan, SFCrowsnest

Like the computer game at the centre of the story, this novel is multi-layered, and deeply addictive. -- Ian Morson, Tangled Web UK

This novel carries its influences with pride and Grimwood's genre savvy is evident throughout. -- Patrick Hudson, The Zone

Mayhem? Oh yes, for this is from the period in which Grimwood was being compared to Tarantino. -- Cheryl Morgan, Emerald City

This is cyberpunk done friendly, and above all else it is a very strongly plotted science ficiton novel and shows the man's talent as a writer. -- Steve Mazey, The Eternal Night