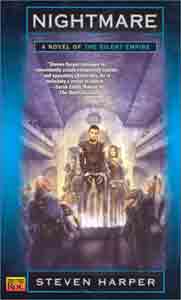 Nightmare: A Novel of the Silent Empire

Synopsis of Nightmare: A Novel of the Silent Empire

In the future, dreams keep the universe running. Dreamers, known as "Silent", are able to look into other people's dreams, communicate with other Silent across the galaxy, and speak to aliens. Silent construct dreams for themselves more vivid than reality.

But some dreams have become nightmares . . .

Kendi Weaver doesn't know he's Silent. Hijacked into slaver, he has resigned himself to a life of servitude. Then the discovery of his innate gift for Dream communiation changes everything. Suddenly Kendi is a very valuable commodity. He is resuced by the Children of Irfan -- a society dedicated to freeing enslaved Silent -- and taken to their planet Bellerophon.

But Bellerophon is hardly a safe refuge. A brutal serial killer is murdering silent in their telepathic dreams, and Kendi is soon embroiled in a world of madness and murder. To catch the killer, he must enter the victim's dreams . . .

Reviews of Nightmare: A Novel of the Silent Empire

I wish he had focused on only one tale, but the combined tale is taut and very readable. -- Henry Leon Lazarus, Tome Of Lazarus - ScienceFiction.com

The concepts that Harper puts forth are intriguing, and I became very involved with them, and the mystery aspects of the Book. -- Cindy Lynn Speer, SF Site