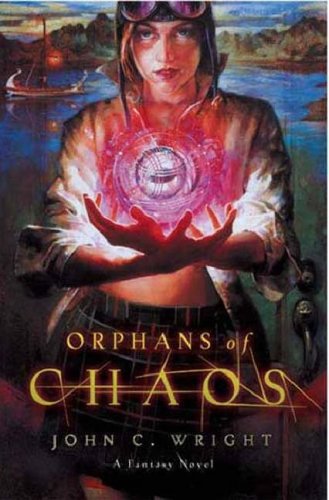 Synopsis of Orphans of Chaos

John C. Wright burst onto the SF scene with the Golden Age trilogy. His next project was the ambitious fantasy sequence, The Last Guardians of Everness.Wright's new fantasy is a tale about five orphans raised in a strict British boarding school who begin to discover that they may not be human beings. The students at the school do not age, while the world around them does. The children begin to make sinister discoveries about themselves. Amelia is apparently a fourth-dimensional being; Victor is a synthetic man who can control the molecular arrangement of matter around him; Vanity can find secret passageways through solid walls where none had previously been; Colin is a psychic; Quentin is a warlock. Each power comes from a different paradigm or view of the inexplicable universe: and they should not be able to co-exist under the same laws of nature. Why is it that they can?The orphans have been kidnapped from their true parents, robbed of their powers, and raised in ignorance by super-beings no more human than they are: pagan gods or fairy-queens, Cyclopes, sea-monsters, witches, or things even stranger than this. The children must experiment with, and learn to control, their strange abilities in order to escape their captors.

Reviews of Orphans of Chaos

Readers looking for "something different" will be well rewarded by spending some time in Wright's most unusual school. -- Drew Bittner, SFRevu

It does not work as a stand alone Book, and might not be enough to encourage all readers to pick up the next installment. -- Renee A. Mallett, Fantastica Daily

This is truly excellent, although I need to mention that it's the first half, or possibly the first third, of the novel, not the whole thing. -- Elisabeth Carey, New England Science Fiction Association, Inc.

is is a work that will be judged ultimately by its sequel, a sequel that has been given no small task in fulfilling what is in my mind Wright's most promising work yet, and my single favorite work by the Author. -- Jay, FantasyBookSpot.com

Perhaps if Laura Antoniou were to get a degree in physics and both Roger Zelazny and Neil Gaiman were dating her and they were all reading Hesiod in the original Greek and studying Christian theology -- they might write something like John C. Wright's novel. -- Paula Guran, Dark Echo