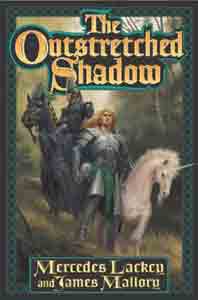 Synopsis of The Outstretched Shadow (The Obsidian Trilogy, Book 1)

Kellen Tavadon, son of the Arch-Mage Lycaelon, thought he knew the way the world worked. His father, leading the wise and benevolent Council of Mages, protected and guided the citizens of the Golden City of the Bells. Young Mages in training-all men, for women were unfit to practice magic-memorized the intricate details of High Magic and aspired to seats on the council.

Then he found the forbidden Books of Wild Magic-or did they find him? The three slim volumes woke Kellen to the wide world outside the City's isolating walls. Their Magic was not dead, strangled by rules and regulations. It felt like a living thing, guided by the hearts and minds of those who practiced it and benefited from it.

Questioning everything he has known, Kellen discovers too many of the City's dark secrets. Banished, with the Outlaw Hunt on his heels, Kellen invokes Wild Magic-and finds himself running for his life with a unicorn at his side.

Kellen's life changes almost faster than he can understand or accept. Rescued by a unicorn, healed by a female Wild Mage who knows more about Kellen than anyone outside the City should, meeting Elven royalty and Elven warriors, and plunged into a world where the magical beings he has learned about as abstract concepts are flesh and blood creatures-Kellen both revels in and fears his new freedom.

Especially once he learns about Demons. He'd always thought they were another abstract concept-a stand-in for ultimate evil. But if centaurs and dryads are real, then Demons surely are as well. And the one thing all the Mages of the City agreed on was that practicing Wild Magic corrupted a Mage. Turned him into a Demon. Would that be Kellen's fate?

Deep in Obsidian Mountain, the Demons are waiting. Since their defeat in the last great War, they've been biding their time, sowing the seeds of distrust and discontent between their human and Elven enemies. Very soon now, when the Demons rise to make war, there will be no alliance between High and Wild Magic to stand against them. And all the world will belong to the Endarkened.

Reviews of The Outstretched Shadow (The Obsidian Trilogy, Book 1)

I try not to give a lot of Books all four stars, but I couldn't bear not to in this case because it carries all the various aspects so well, putting them together in a story that definitely works its own bit of magic on the reader. -- Cindy Lynn Speer, Fantastica Daily

OUTSTRETCHED is an exciting start to a new Series. -- BooksForABuck

The mixture of Mercedes Lackey's prolific experience and co-Author James Mallory's work as a professional ghost-writer makes for an easy read, guaranteed not to wear out any brain cells along the way. -- Jennifer Howell, SF Crowsnest