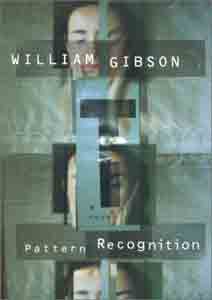 Cayce Pollard is an expensive, spookily intuitive market-research consultant. In London on a job, she is offered a secret assignment: to investigate some intriguing snippets of video that have been appearing on the Internet. An entire subculture of people is obsessed with these bits of footage, and anybody who can create that kind of brand loyalty would be a gold mine for Cayce's client. But when her borrowed apartment is burgled and her computer hacked, she realizes there's more to this project than she had expected.

Still, Cayce is her father's daughter, and the danger makes her stubborn. Win Pollard, ex-security expert, probably ex-CIA, took a taxi in the direction of the World Trade Center on September 11 one year ago, and is presumed dead. Win taught Cayce a bit about the way agents work. She is still numb at his loss, and, as much for him as for any other reason, she refuses to give up this newly weird job, which will take her to Tokyo and on to Russia. With help and betrayal from equally unlikely quarters, Cayce will follow the trail of the mysterious film to its source, and in the process will learn something about her father's life and death.

''Pattern Recognition'' is Gibson's most complex, mature gloss on the artist's relationship to our ever more commercialized globe -- Lisa Zeidner, The New York Times

I do think that it is safe to say that if you like Gibson's recent work, you will like Pattern Recognition. -- Ian Kaplan, Bearcave.com

In Pattern Recognition, Gibson puts his visionary focus on the impact of the interconnected global economy and reveals how the constant pressure to consume chips away at our sense of self. -- Gavin J. Grant, Bookpage

If you like Easter egg hunts, finding Waldo, playing Six Degrees of Kevin Bacon, or any other ...find the hidden connection... games, you...ll like William Gibson's seventh Book of fiction. -- Alex Lightman, SFRevu

William Gibson's new novel is so good it defies all the usual superlatives. -- Nisi Shawl, The Seattle Times

The completely contemporary "Pattern Recognition" finds the Author rejuvenated, ready to acknowledge that the world has become a stranger place than could have been imagined even 15 years ago. -- Michael Berry, San Francisco Chronicle

It's perhaps Gibson's most stark vision yet -- Adam Dunn, CNN

The wisest vector for Gibson appears to be back to the future. -- David Hiltbrand, The Philadelphia Inquirer

Note to Gibson: Go back to the future! -- Milford Reid, Minneapolis Star Tribune

The odd but poetic metaphors for which Gibson is so admired for become more sparse as the Book hurtles toward its thriller-like conclusion and its somewhat predictable ending, complete with a Russian business tycoon who has roots in organized crime and former KBG agents on staff. -- Therese Poletti, San Jose Mercury News

The prince of digital cool has once again deployed his considerable gifts for intimating the shape of our future while demonstrating that he's matured significantly as a prose stylist. -- Steven E. Alford, Houston Chronicle

According to Gibson, The Footage and Cayce's special talents are the only inherently sci fi elements in Pattern Recognition, but the reader is blinded with so much science that you indeed feel as if you are reading just another William Gibson novel, which is no bad thing. -- Stephen Jewell, The New Zealand Herald

"Pattern Recognition" is poetry and sharp social observation, in a story that is wound tightly around an irresistibly complex plot with an ending that is sweetly satisfying. -- Joanna Rose, The Oregonian

Maybe if he goes back to the future he'll regain his edge. -- Polly Shulman, Newsday.com

The Book peers so intently at the unthinkable here and now it induces something like infinite vertigo. -- Dennis Lim, Village Voice

It turns out that William Gibson, by his own account, is not much of a seer or philosopher. But in a Book where most of the science fiction trappings have fallen away, he reminds us what a wonderful prose stylist he is and has always been. -- John Cruickshank, Chicago Sun Times

If you blink while reading any part of William Gibson's Pattern Recognition, chances are you'll miss an action scene so amazingly hip, you'll want to prop your eyes open with toothpicks in the future. -- Nicholas Thomas, USA Today

Cyberpunk purists may scoff, but Gibson's surprising move toward the mainstream has made him an even better writer. And he hasn't lost any of his cool. -- Jay Pawlowski, Rocky Mountain News

Combining old-fashioned storytelling techniques with a recognition of yet-to-be-defined patterns, Gibson's tale is a robust inquiry into the many (and often veiled) ways that marketing shapes the world in which we live. -- Bernadette Murphy, LA Times

The novel is a fast-moving movie, a Series of information-rich "visuals." -- Bill Robinson, MostlyFiction.com

...it's well worthy of your attention. -- Matthew Whitaker, The Alien Onine

I guess if I had never read one of William Gibson's Books this would not be a bad place to start ... especially for the non-sci-fi reader ... but as someone who has voraciously read all of his previous work this is one huge letdown. -- Rich DeSensi, Fantastica Daily