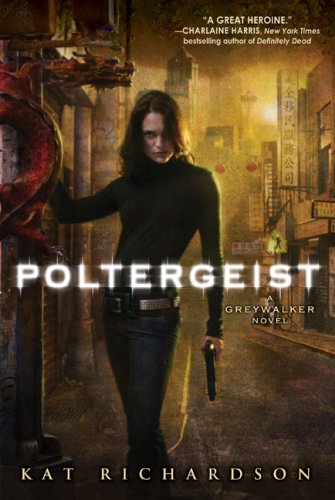 Synopsis of Poltergeist: A Greywalker Novel

Harper Blaine was your average small-time PI until she died-for two minutes. Now she's a Greywalker-walking the thin line between the living world and the paranormal realm. And she's discovering that her new abilities are landing her all sorts of "strange" cases.

In the days leading up to Halloween, Harper's been hired by a university research group that is attempting to create an artificial poltergeist. The head researcher suspects someone is faking the phenomena, but Harper's investigation reveals something else entirely-they've succeeded.

And when one of the group's members is killed in a brutal and inexplicable fashion, Harper must determine whether the killer is the ghost itself, or someone all too human.

Reviews of Poltergeist: A Greywalker Novel

This is urban fantasy at its best with new ideas, crisp dialogue, great characters, and exciting stories. -- Gayle Surrette, SFRevu

Urban fantasy fans will take immense delight in the latest Greywalker thriller as the heroine is at her best combining Dresden with Millhone. -- Harriet Klausner's Review Archive

Dogged and gusty P.I. Harper Blaine chronicles her first-person adventures into the unknown with a gripping, stark realism for a truly excellent blend of detective drama and paranormal thriller. -- Romantic Times

...smart, action-packed, fast-paced, and one hell of a ghost story. What's not to like? -- Wordcandy.net