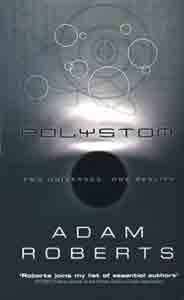 In Adam's universe, a breathable atmosphere extends between planets, aristocrats cruise insterstellar space in biplanes, and skywhals make mysterious distant orbits. The hero, Polystom, the fiftieth steward of Enting, has always lived in a world of certainties: certain that his new wife will love him, certain that his servants respect him, certain that war will bring him the glory he seeks. Then his uncle Cleonicles--the inventor of the Computational Device, the greatest work of man, the summation of human knowledge, the explanation of the stars--dies. And that is only the first shock to Polystom's comfortable view of life...

Sadly I was rather disappointed and finding the contents close on to gibberish, I had great difficulty not in putting it down but of picking it up again to finish the text. -- Rod MacDonald, SFCrowsnest

Possessed of an impeccable prose style akin to Ian MacLeod's, a fevered imagination, a real gift for plotting and a devotion to the SF genre, Roberts seems assured of a future much brighter than that of poor Polystom, whose brilliantly depicted lack of self-knowledge is his fatal undoing. -- Paul Di Filippo, Scifi.com

I'm still unsure what to make of it all. -- John Toon, Infinity Plus

Polystom is a complex novel, and Roberts has created a richly fascinating world and complex characters to populate it. -- Patrick Hudson, The Zone

You won't read anything else quite like it... -- John C. Snider, Scifi Dimensions

...he presents an entirely unpleasant main character and yet manages to make him ultimately sympathetic -- David Soyka, SF Site