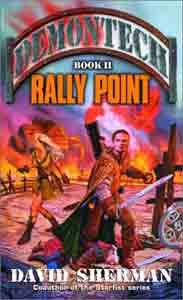 Ruthless and seemingly indestructible, the dark army didn't count on the few, the proud, the Marines.

The Dark Prince's vast armies have destroyed nation after nation with the aid of powerful demon magic. Their total victory would be swift and certain except for two things: Haft and Spinner, a pair of soldiers trained in the art of warfare through the teachings of a magically transported Marine Gunnery Sergeant.

The Dark Prince's orders are swift and simple: find them. Haft and Spinner, along with scores of soldiers and refugees, are determined to form an army and defeat the invaders. Outnumbered and outgunned, they must uncover and kill the enemy before the enemy kills them. Haft and Spinner have already accomplished great feats. But to achieve the impossible will require a few strokes of genius and a few good men. Fortunately, these Marines have both. . . .