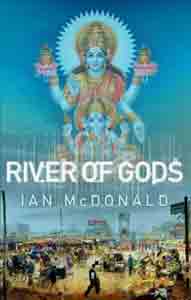 Synopsis of River of Gods

August 15th, 2047. Happy Hundredth Birthday, India... In the mid twenty-first century, Mother India is all the things she is now - ancient and vibrant, poor yet staggeringly rich. Diverse, violent, beautiful and terrible, thrilling and bewildering. A nation choked with peoples and cultures, riven with almost seismic contrasts and contradictions. Nearly two billion humans crowd the subcontinent and her seething cities - the cyberabads - where timeless culture and the highest of high-technologies meet to spawn new societies, and - possibly - new sentient species. RIVER OF GODS is a Book as big and brawling as its subject. Its magnificently diverse array of characters - from genetically enhanced 'Brahmins' to body-part runners, American scientists to 'Dharma-cops' (government Artificial Intelligence assassins) - are drawn in interwoven stories towards a cosmic-scale conclusion that will forever change the way we understand ourselves, life, and the universe we inhabit.

Reviews of River of Gods

And add in to the mix, a political situation that seems to heading towards a major war, the discovery of an object that could turn out to be mankind's first encounter with an alien civilsation, and many touches that touch on the territory of the cyberpunk Authors, and you have a rich, highly detailed world and a compelling story. -- Steve Mazey, The Eternal Night

It's a real pleasure to read. -- Geneva Melzack, The Alien Online

Don't miss this one, you won't see anything else like it this year. Besides, it has trains. -- Cheryl Morgan, Emerald City