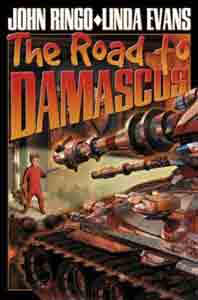 The Road to Damascus

Synopsis of The Road to Damascus

When a ruthless political regime seizes power on a world struggling to recover from alien invasion, a former war hero finds herself leading a desperate band of freedom fighters. Kafari Khrustinova, who fought Deng infantry from farmhouses and barns, finds herself struggling to free her homeworld from an unholy political alliance, headed by the charismatic and ambitious Vittori Santorini, which has seduced her young daughter with its propaganda and subverted the planet's Bolo, using the war machine to crush all political opposition. To free her homeworld, Kafari must somehow cripple or kill the Bolo she once called friend. Unit SOL-0045, 'sonny,... is a Mark XX Bolo, self-aware and intelligent. When Sonny's human commander is forced off-world, Sonny tries to navigate his way through ambiguous moral and legal issues, sinking into deep confusion and electronic misery. He eventually faces a dark night of the soul, with no guarantee that he will understand...let alone make'the right decision. And caught in the middle of this volatile battlefield is Yalena Khrustinova, Kafari's young daughter. Will she open her eyes in time to save herself...and millions of innocents...or will Santorini's relentless brainwashing campaign continue to blind her while the tyrant engineers the ultimate destruction of a helpless and enslaved population?

Reviews of The Road to Damascus

A couple of hundred pages of tightening and this could have been a first-rate military SF thriller. -- BooksForABuck

This is an exciting military and post military science fiction novel that would make Keith Laumer proud of what John Ringo and Linda Evans has done with his Bolo. -- Harriet Klausner, Harriet Klausner's Review Archive

Can the rebels stop a Bolo used by a madman, or must it stop itself? It might take a while to find out in this weighty tome, but with Authors like Ringo and Evans on the crew, and a Bolo at its heart, it has a lot to recommend it.. -- Ernest Lilley, SFRevu