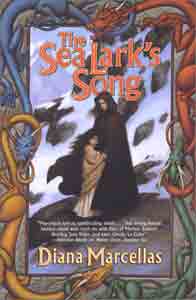 Synopsis of The Sea Lark's Song

With Mother Ocean, Daughter Sea, Diana Marcellas crafted an incredible first novel that explored what it means to be different, to value that difference, and what happens when one trusts in true love. The Sea Lark's Song is the second in this achingly beautiful triptych of tales about a most extraordinary woman who holds the power to reshape an entire world . . . buy if she has the courage.

Young Brierley thinks she is the last shari'a witch in the world. The Shari'a people were an ancient race-a gentle and proud people who knew how to harness the powers of the world for the benefit of all. When the seafaring Allemani tribes came to their shores, the two races lived side by side for generations, but something went horribly awry and the Shari'a people were suddenly and brutally slain by the new settlers who feared the shari'a and their powers. The pitiful remnants of this people were scattered and any that held the knowledge of the old ways were proscribed to be hunted to death.

Brierley saved the life of a nobleman's wife-a nobleman sworn to obliterate any trace of witchery-and stumbled into a web of deceit and power struggles more deadly than anything she had ever faced. Her decision led her to danger, banishment, and near death. But she survived in spite of it all and wonder of wonder, found true love in the bargain. So now her journey begins. Her way will be hard and filled with peril. But there is hope too. For Brierley has discovered two things that will change her world forever: that the power of love is stronger than most of the world's magic.

Reviews of The Sea Lark's Song

Though somewhat typical of the sub-genre, THE SEA LARK's SONG, the sequel to MOTHER OCEAN, DAUGHTER SEA, is an exciting female fantasy tale that grips the reader from start to finish because the heroine is an extraordinary individual who both genders will admire. -- Harriet Klausner, BooksNBytes