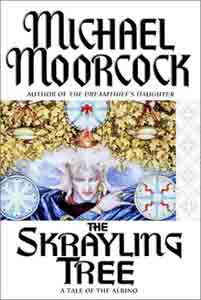 Synopsis of The Skrayling Tree

Ulrik von Bek is plagued by mysterious and disconcerting events: Having traveled to Canada with his beloved wife Oona, he is visited by a strange and youthful albino resembling himself. When Oona is abducted by a band of albino Native Americans, Ulrik trails the group by using The Skrayling Oak and soon finds himself in the multiverse where he is reconnected with his alternate self, Elric of Melnibon.... It is there that Elric/Ulrik discover that their arch-nemesis Gaynor, now ruling over a mob of outcasts, is behind Oona's abduction. And it is also there that they find themselves once again battling supernatural forces in the never-ending struggle between Law and Chaos that rages on in both their universes.

Reviews of The Skrayling Tree

If you've never read any Moorcock, then, for the holy sake of all things imaginative, go out and BUY THIS Book NOW. -- John Patrick Schmitz, The Door to Worlds Imagined

All told, Moorcock has once again brought his Eternal Champion mythos to the forefront of Fantastic Literature, engaging the reader to consider the nature of reality, our place in this supposed reality while telling an entertaining and satisfying story. -- Rob H. Bedford, SFFWorld

There is something in The Skrayling Tree to keep all Moorcock enthusiasts happy. -- Jeff Gardiner, The Alien Online

I call this story intricate, and it is. -- Cindy Lynn Spear, MostlyFiction.com