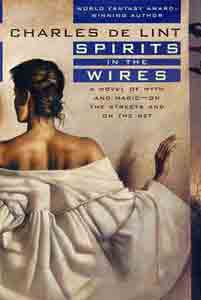 Spirits in the Wires

Synopsis of Spirits in the Wires

Charles de Lint's Newford novels, loosely linked "tales" with overlapping characters set in an imaginary modern North American city, are tales of magic and myth afoot on today's city streets. But at the center of every de Lint story is the miracle of the human heart.

And at the heart of Spirits in the Wires are Saskia Madding and Christiana Tree, both of whom are tied to perennial Newford character, the writer Christy Riddell. Are either Saskia or Christiana real? Christy's girlfriend, Saskia, believes she was born in a Web site, while Christiana is Christy's "shadow-self"--all the parts of him that he cast out when he was seven years old.

At a popular Newford on-line research and library Web site called the Wordwood, a mysterious "crash" occurs. Everyone visiting the site at the moment of the crash vanishes from where they were sitting in front of their computers. Saskia disappears right before Christy's eyes, along with countless others.

Now Christy and his companions must journey into Newford's otherworld, where the Wordwood, it transpires, has a physical presence of its own...to rescue their missing friends and loved ones and to set this viral spirit right before it causes further harm.

Reviews of Spirits in the Wires

de Lint's writing is lyrical, engaging the reader and giving the story a tang of its own. -- BooksForABuck

This is a very fine piece of magical realism that does what it's supposed to do...entertain, while encouraging us to look for the mythic, for the magic, in our own lives. -- Cindy Lynn Speer, Fantastica Daily